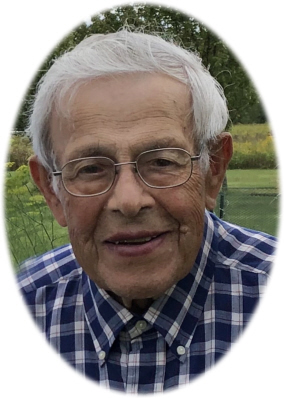 Wolodymyr “Walter” Pytlowanyj passed away on January 16, 2022 at the age of 97.  He died peacefully in his home surrounded by his family.

Wolodymyr was born in Koltiw, Ukraine on November 27, 1924, the oldest son of Evdokia (Skoczylas) and Wolodymyr Pytlowanyj.  Due to the ravages of WWII, Walter was forced to flee his beloved homeland, and eventually came to live in a Displaced Persons camp in Germany.  Fortune allowed him to obtain official papers to sail to America, and he arrived at Ellis Island on Columbus Day, 1949.  In 1952 he proudly became a U.S. citizen.  He eventually found his way to Lansing, Michigan where he acquired a job with Oldsmobile, from which he retired after 35 years of service.  Additionally, he worked on his farm until his health began to fail.

Married to his devoted wife, Jennie, for 70 years, he was the proud father of six children:  Pearl (Nykola) Bartkiw, Wolodymyr Pytlowanyj, Jr., Steve (Deb) Pytlowanyj, Stephanie Pytlowanyj, Nicholas Pytlowanyj, and Maria (Jean-Pierre) Nahirnyj.  Over the years his family grew to include 12 grandchildren and 10 great-grandchildren.  He was preceded in death by his parents, and son Wolodymyr Jr.,  onebrother Stephan and sister Maria.   Always a faithful and loving husband, he was a generous father and grandfather that served as a strong moral compass for his family. He knew and spoke five languages and maintained an active interest in the world around him.  A deeply spiritual man, he was a member of St. Vladimir Ukrainian Catholic Church in Flint, Michigan and St. Joseph Catholic Church in St. Johns, Michigan. "Vichnaya Pamyat!" (Eternal Memory.)

To order memorial trees or send flowers to the family in memory of Wolodymyr Pytlowanyj, please visit our flower store.