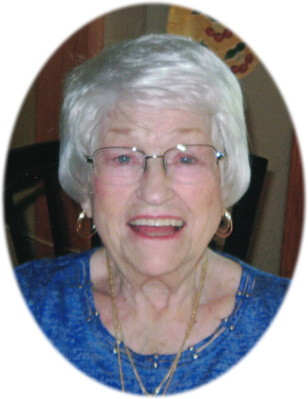 A cremation has taken place and a Celebration of Wilda’s Life will be held next summer. Burial will be at Pritchard Cemetery, Elwell, MI next to her husband Eugene Fairchild.

Wilda worked at Gratiot Community Hospital from the first day it opened in 1955 until her retirement in 1978. She was a member of the American Business Women’s Association, and she served as an officer for the Alma Chapter. She was voted Business Woman of the Year during her affiliation.

After her marriage to Ben Sammons, Wilda moved to Wisconsin. She was very active at her senior living apartment complex, volunteering many hours to sewing projects, including baby blankets and bibs for new mothers and sleep mats for homeless shelters. Her love for sewing culminated in many years spent creating beautiful quilts for family and other loved ones. Three of her granddaughters had their grandmother teach them this skill, and they carry on the tradition. She also enjoyed game nights with her neighbors and friends, especially card games and dominoes. At the age of 91, she was still canning and making baked goods and jams. She was a good friend to all her neighbors and missed them dearly when she moved back to Michigan in 2020.

Wilda had a devout love for all her family members, near and far, and whenever possible would call each one with personal birthday wishes. She is loved by all who’ve known her.

Those left to cherish her memory include her children: Deborah Fairchild, Julie Fairchild, Kathryn (Gary) Frisbie, Ralph (Jo) Fairchild, Susan (Kenneth) Zinn, Fred Sammons, and Sally (Paul) Alane; 16 grandchildren and 14 great grandchildren. She was also blessed with many nieces and nephews who all cherished her for her kind and thoughtful ways. She always welcomed them with open arms. Wilda was preceded in death by her parents Paul and Elizabeth Morey, first husband Eugene Fairchild, second husband Ben Sammons, and nine siblings: Elsie, Max, Arlene, Frances, Blanche, Raymond, Virginia, Shirley, and Jack.

To order memorial trees or send flowers to the family in memory of Wilda Sammons, please visit our flower store.
Send a Sympathy Card