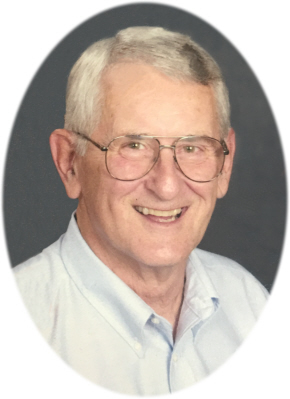 Robert (Bob) was born in St. Johns, MI on October 25, 1937 the son of Raymond Gordon and Caroline C. (Popovich) Stephens.  Bob was a graduate of Fulton High School in 1955.  Bob was active during his high school years as an athlete participating in basketball, baseball and football.  He was also on the student council and class president.  Bob attended the Maple Rapids United Methodist Church.

Bob married Marylin Eyer on June 29, 1957 in Maple Rapids.  He resided most of his life in Maple Rapids, MI.  Bob retired from Fisher Body in Lansing after 30 years of work.  Bob enjoyed hunting and fishing.  He and his family enjoyed many Stephens/Trefil vacations to Rapid River, fishing on Little Bay de Noc.  Bob was a member of the Maple Rapids Fire Department, and was also on the Maple Rapids Village Council.  Bob was also a youth baseball and basketball coach.  He was involved in the formation of the Maple Rapids Ball Boosters.  Bob was part of the chain gang for Fulton football and kept books for Fulton basketball.  Bob's greatest joy was attending his kids, grandkids and great-grandkids many sporting events, never missing a game.

Memorials may be made to Fulton Athletic Boosters or the Ronald McDonald House of Mid-Michigan.  Online condolences can be sent to www.smithfamilyfuneralhomes.com. The family is being served by Smith Family Funeral Homes - Osgood Chapel, St. Johns, MI.

To order memorial trees or send flowers to the family in memory of Robert Stephens, please visit our flower store.