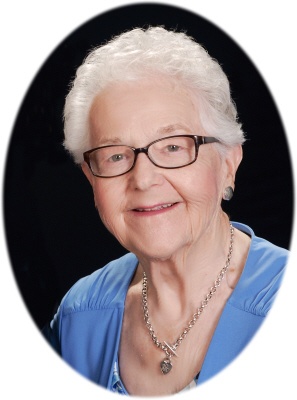 Phyllis Jean Rhynard, age 86, of Lansing, MI, passed away after a courageous battle with dementia on Thursday, April 30, 2020, at the Hospice House of Mid-Michigan, Lansing, surrounded by her family.

Phyllis was born in St. Johns, MI on July 23, 1933, the daughter of Clare and Ella (Blunt) Dilts.  She graduated from Rodney B. Wilson High School with the class of 1951.

On July 9, 1955, Phyllis married Marvin Lawrence Rhynard at the First United Methodist Church of St. Johns.  They were blessed with 64 years of marriage. Phyllis was a devoted wife and a loving mom.  Most of all, her grandchildren were her greatest joy in life.  She made countless Halloween costumes for them, baked with them, attended all their sports and music activities, and was the best Gram any kid could have.

Phyllis was a member of Gunnisonville United Methodist Church for over 56 years. During those years, she was always involved in many activities, Caring Hearts Sewing Circle, singing in the choir, teaching Sunday school or wherever she was needed.  She enjoyed any opportunity to have lunch with "The '51 Lunch Bunch" classmates or retirees from Citizens Bank.  Phyllis and Marvin enjoyed traveling around the country in their classic cars as members of the National Buick Club of America and the Central Michigan Buick Club.

To order memorial trees or send flowers to the family in memory of Phyllis Rhynard, please visit our flower store.