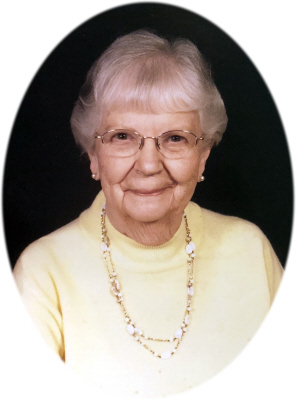 Pauline Jean Sparks, age 97, of Ithaca, MI, passed away Monday, April 5, 2021, at Masonic Pathways, Alma, MI. She was a loving wife, mother, grandmother and great-grandmother who loved her family dearly.

Pauline was born in Ithaca, MI on October 7, 1923, the daughter of Harrison and Olive (Abbott) Wood. She graduated from Ithaca High School with the class of 1941 and then married Bernard Norman Sparks on July 2, 1941 in Bowling Green, OH.

She worked at Carson City Hospital for 18 years retiring in 1982 after having worked many of those years as the administrative assistant to the hospital administrator.

Pauline was a member of the Ithaca United Methodist Church. She was very active at the Ithaca Senior Activity Center. She especially enjoyed the sing-a-longs and traveling with the Sunshine Band to sing at area nursing homes. Over the years Pauline enjoyed antiquing with her sister Dorothy, going to garage sales while spending winters in Florida, crocheting, playing cards and bingo, and following the Detroit Tigers.

Pauline was very conscious of the importance of exercise. She rode her 3 wheel bicycle and later a stationary one and walked daily. She was an inspiration to us all.

She is survived by her sons: Jerry and Linda Sparks of Sumner, MI, Chris and Susan Sparks of Sumner, MI, grandchildren: Tim and Jan Sparks of Jackson, MI, Candyce and Jeff Shields of Milford, MI, Angela and Jason Ostrander of Ithaca, MI and Michael and Nicole Sparks of Ithaca, MI, 7 great-grandchildren, sister Dorothy and Larry Lippert of Alma, MI, and brothers: Bob Wood of St. Louis, MI and Jim Wood of St. Louis, MI.  She was preceded in death by her parents, her husband, and her sister Lorene Peet.

Funeral Services will be held at Smith Family Funeral Homes, Ithaca, MI, on Thursday, April 8, 2021 at 1:00 P.M., with Mrs. Jo Jones officiating.  Burial will take place at New Haven Township Cemetery, Gratiot County, MI. Visitation will be held on Thursday from 11:00 A.M. until the time of the funeral service.

Memorials may be made to the Ithaca Senior Activity Center, Ithaca, MI. Online condolences can be made at www.smithfamilyfuneralhomes.com. The family is being served by Smith Family Funeral Homes, Ithaca, MI.

To order memorial trees or send flowers to the family in memory of Pauline Sparks, please visit our flower store.