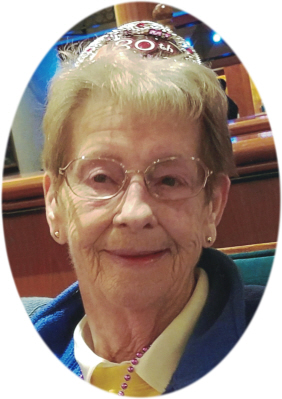 Aggie was born in Biscoe, North Carolina on May 24, 1937, the daughter of Halbert and Pansy (Bryant) McCallum. She graduated from Candor High School, Candor, NC, with the class of 1955.

Aggie married Franklin Deane Starry on September 9, 1955 in Bennettsville, SC.  They were blessed with 47 years of marriage before his death on January 23, 2003.

Aggie and Frank owned Starry Men's Shop for several years.  After selling the store, she worked as a secretary at St. Louis High School.  Aggie devoted the rest of her life to her family as a wife, mother, and grandmother.  She loved traveling with her beloved husband, going to the casino, cooking; especially her fried chicken, and hosting large family dinners. She was a member of St. Louis First United Methodist Church.

Memorials may be made to Heartland Hospice - 1426 Straits Dr. Bay City, MI 48706. Online condolences may be left for the family at www.smithfamilyfuneralhomes.com. The family is being served by Smith Family Funeral Homes, St. Louis, MI.

To order memorial trees or send flowers to the family in memory of Mary Starry, please visit our flower store.