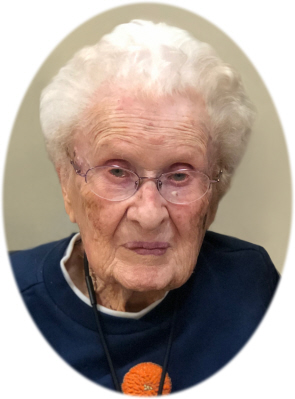 Lenore was born in Emerson Township, Michigan on February 1, 1918, the daughter John Lang Fernside and Mary Lenore (Case) Smith. She graduated from Breckenridge High School with the class of 1935. She married Halden E. "Mutt" Muscott on July 4, 1939 in Ithaca, Michigan; they were blessed with 68 years of marriage.  Mutt passed away on November 1, 2007.

Lenore had worked for Greening Auto Company and Michigan Milk Producers a number of years ago. Lenore enjoyed reading, knitting and playing piano. Visits with her grandchildren and great grandchildren brought her much enjoyment. She was a member of Emerson Presbyterian Church.

Memorials may be made to Pompeii Baby Pantry, Gratiot County Historical Society, or Gratiot County Commission on Aging.  Online condolences can be sent to www.smithfamilyfuneralhomes.com. The family is being served by Smith Family Funeral Homes, Ithaca, Michigan.

To order memorial trees or send flowers to the family in memory of Lenore Muscott, please visit our flower store.