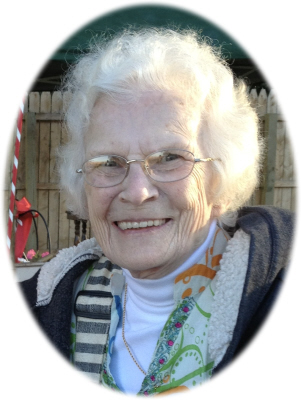 Josephine Annette Borst, age 87 of Elsie, MI, passed away peacefully on Sunday, March 7, 2021, at 3:00 PM with family by her side. She said she was, “ready to go be with Jesus,” and lived the last few days of her life with great dignity and grace.

Josephine was born in Laingsburg, MI, on April 18, 1933 to Edward and Josephine Waterous, although the hospital incorrectly recorded her birthday as April 19. She grew up with her older sister, Laura, and her younger brother, Jerry. Jerry and Josephine were quite a pair growing up, raising a little mischief as children. They remained very close until his passing last fall. Josephine graduated from Laingsburg High School. She married Irwin William Borst and together they raised 7 children. Josephine was a homemaker, mother and a jack of all trades. She truly was gifted with the knack for carpentry and was eager to learn many things, including plumbing, minor electrical repairs, and stained glass. She could repair almost anything, so much so that her granddaughter, Mickayla, once took a dead rose stem to her and asked her to fix it because she was sure Grandma knew how. She was great at the art of observation, which came in handy learning so many skills, but she also observed and marveled at nature. She often sat still and as she would say, ‘listened to the silence.” Her favorite Bible verse was, “Be still and know that I am God.” Josephine had a way of uniquely touching the lives of all who met her. She was cherished by so many. She was full of sage advice and had a way with words. She could say so much in so few words. She often said, “Say something profound,” because she wanted to hear what the response would be, always trying to glean wisdom from others. Yet, many who met her would say she was the wisest person they knew.

Josephine requested to be cremated and her remains will be buried at Riverside Cemetery in Elsie, MI. A Memorial Service will be held at a later date.

Donations are not being collected but if you wish to memorialize her, plant a tree or plant in her honor and smile at it.  Online condolences can be made at www.smithfamilyfuneralhomes.com  The family is being served by Smith Family Funeral Homes, Elsie, MI

To order memorial trees or send flowers to the family in memory of Josephine Borst, please visit our flower store.
Send a Sympathy Card