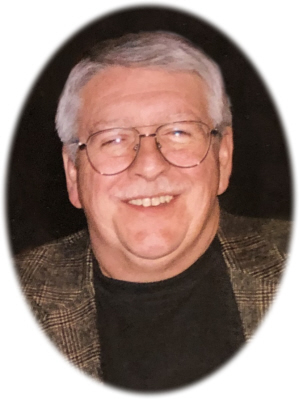 Cremation has taken place and a celebration of life will be held at a later date.

James was born in Carson City, MI on May 25, 1944, the son of Charles and Agnes (Edmonds) Melvin. Jim graduated from Muir Lyons High School and then graduated from Western Michigan University receiving a bachelor’s degree in music.  Jim married Audrey Miller on December 19, 1970, in St. Johns, MI.

Jim was a music teacher at Ashley High School for 10 years. After teaching he worked as a manager at Rite Aid in Carson City for many years. Jim enjoyed jazz music, hunting, fishing, and watching old westerns. He liked golfing and played on various leagues locally. Jim loved time spent with his family, especially his grandchildren. He also enjoyed spending time with his close friends at the shack.

He is survived by his wife Audrey Melvin of Ashley, daughter and son in law Stephanie and Denny Watson of Shelby Township, MI; daughter Nicole Hedrich of Merrill, MI; granddaughters: Riley and Makinzie Hedrich; brothers: Jerry and Vicki Melvin of Higgins Lake, MI; Ron and Leslie Melvin of Mason, MI; Rod and Rita Melvin of Cordova, CA; and nephew Shawn and Carla Melvin of Brodhead, WI. He was preceded in death by his parents.

Memorials may be made to Gratiot County Juvenile Office, 214 E. Center Street, P.O. Box 217, Ithaca, MI to benefit court programming for youth.  Online condolences can be made at www.smithfamilyfuneralhomes.com. The family is being served by Smith Family Funeral Homes, Ithaca, MI.

To order memorial trees or send flowers to the family in memory of James Melvin, please visit our flower store.