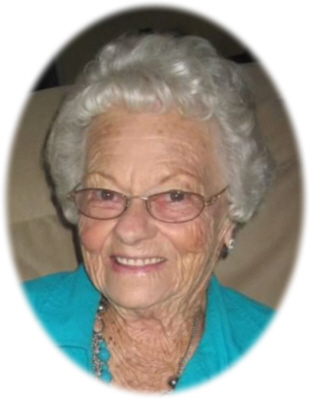 A Memorial Service will be held at Smith Family Funeral Homes Ithaca, MI, on Monday, June 24, 2019, at 4:00 P.M., with Jo Jones officiating.  Burial will take place at North Star Cemetery, North Star, MI.   Visitation will be held from 2:00 P.M. until the time of service at the funeral home.

Gladine was born on March 14, 1922 in North Star Township, MI, the daughter of Bert and Mildred (White) Zoss. She graduated in 1940 from Ashley High School and resided most of her life in the North Star and Ashley area. Gladine married Richard Goodhall on February 20, 1943 and lived on the same farm for 75 years.  Richard taught her how to drive a car, and how to be his helper on the farm. After Richard retired they spent time taking trips and going on cruises. She loved to crochet, play cards and bingo, and go to the casinos. She was a member of the Wednesday Club that became the Chit Chat Club, and was also a member of the East Washington Extension Club. She loved her Ashley and bingo friends, young and old, and always had a smile. Family was very important to her.

Memorials may be made to the Ithaca Senior Center Ithaca, MI.  Online condolences can be made at www.smithfamilyfuneralhomes.com. The family is being served by Smith Family Funeral Homes, Ithaca, MI.

To order memorial trees or send flowers to the family in memory of Gladine Goodhall, please visit our flower store.
Send a Sympathy Card