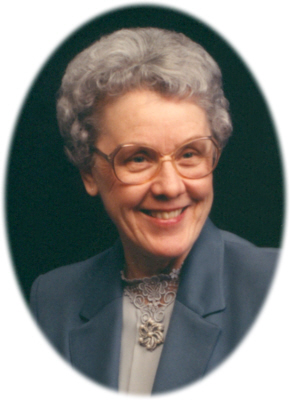 Ethel was born in Howell, MI on March 27, 1924, the daughter of John H. and Jesse (Sharp) McNamara. She attended nursing school at Harper Hospital and became a Registered Nurse. Ethel married William E. Wilson on February 7, 1947 in Howell, MI; he passed away on March 16, 1999.  She married Archie J. Moore on May 10, 2003 at Elsie United Methodist Church, Elsie, MI; Archie passed away on September 12, 2011.

She collected buttons, thimbles and sewing accessories, among many other things. Ethel enjoyed arranging flowers for her church altar and shut-ins. She was a member of the Elsie United Methodist Church and she taught Sunday school classes and vacation bible school for many years. She was involved in Boy Scouts and Girl Scouts as a den mother and leader. Ethel was a Rosie the Riveter at Willow Run Airport during WWII. She worked in private nursing for many years and also worked at Glen Eden Hospital for 21 years.

Memorials may be made to The Alzheimer's Foundation, 225 North Michigan Ave. Chicago, IL 60601.  Online condolences can be sent to www.smithfamilyfuneralhomes.com. The family is being served by Smith Family Funeral Homes, Elsie, MI.

To order memorial trees or send flowers to the family in memory of Ethel Moore, please visit our flower store.