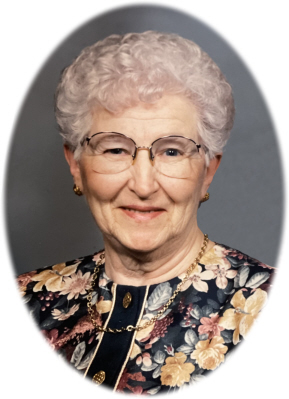 Eloise was born in New Haven Township, MI on April 16, 1921, the daughter of Fred and Eva (Bell) Akin. She graduated from Carson City with the class of 1940. Eloise married Harold Stadlberger on February 6, 1943, in New Haven Township; Harold passed away on June 2, 2006.

Eloise and her husband owned and operated the New Haven Center Store from 1946-1968. She was one of the few remaining Rosie the Riveters left; she worked in Lansing making bomber airplane wings during WWII. Eloise also worked for Wolverine Manufacturing in Ithaca for many years.

Eloise enjoyed gardening, quilting, crafting, playing games such as bingo, phase 10 and Uno. She enjoyed baking cookies, cinnamon rolls and bread for her friends and family. She liked sharing the Daily Bread and spending time with her family and friends. Eloise was a devoted wife, mother, grandmother, great grandmother, and great great grandmother. She attended the Ithaca Baptist Church and the Gratiot Senior Center.

She is survived by her daughter DeeAnn Smith of Maple Rapids,

Memorials may be made to Ithaca Baptist Church, 221 Norton Gibbs Drive, Ithaca, MI 48847.  Online condolences can be made at www.smithfamilyfuneralhomes.com. The family is being served by Smith Family Funeral Homes, Ithaca, MI.

To order memorial trees or send flowers to the family in memory of Eloise Stadlberger, please visit our flower store.
Send a Sympathy Card