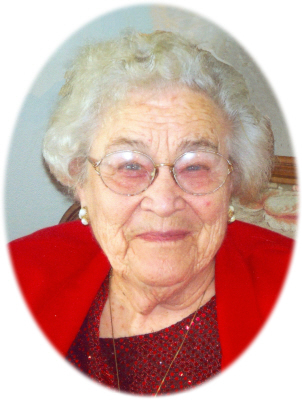 Dorothy Jane Hoffer, age 97, of Alma, MI, passed away Wednesday, January 22, 2020, at Masonic Pathways. The same day as her husband Harley 15 years ago.

Dorothy was born in North Star Township, MI, on November 10, 1922, the daughter of Vern and Tressa (Dailey) Maxwell. She graduated from Ithaca High School in 1940 as valedictorian. Dorothy married Harley Hoffer Jr. September 4, 1943; he preceded her in death on January 22, 2005.

Dorothy was a proud homemaker and worked for the USDA for 25 years. After her retirement, she and Harley traveled to all 50 states. They also went to Canada, Italy, Austria, Germany and Switzerland. They spent 25 wonderful winters in Florida and made numerous friends. She also went to Mexico to visit their exchange student, Augusto Alvarez.

She loved being with her family. She treasured time spent with her grandchildren and great grandchildren. Dorothy especially enjoyed genealogy, going to reunions and keeping in touch with family and friends.

She is survived by her daughter Sharon and Ken Hayes of Ithaca, and son Miles and Pat Hoffer of Saginaw; six grandchildren: Troy (Kim) Hayes of Ithaca, Laurie Little of Alma, Julie (Ronald) Fish of Ithaca, Danielle (Ben) Kennedy of Houston, Marcel Hoffer of Hopkins, and Jason (Tina) Hoffer of West Olive. She has 15 great grandchildren and a great great granddaughter Lilian Rayne Kennedy. She was preceded in death by her parents Vern and Tressa Maxwell, husband Harley and brother Melvin Maxwell.

Memorials may be made to East Washington United Brethren Church, Ashley, MI 48806, Ithaca Food with Friends, or to a Charity of the Donor's Choice.  Online condolences can be sent to www.smithfamilyfuneralhomes.com. The family is being served by Smith Family Funeral Homes, Ithaca, MI.

To order memorial trees or send flowers to the family in memory of Dorothy Hoffer, please visit our flower store.
Send a Sympathy Card