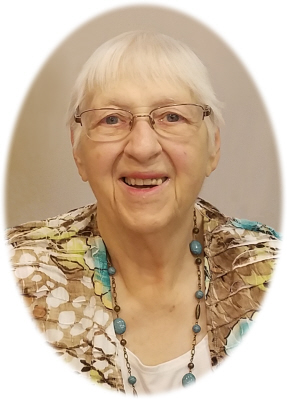 Doris was born in Ovid, MI on January 25, 1933, the daughter of Harold and Pauline (Simpson) Coffman.  She graduated from of Ovid High School. Doris married Warren Duerr Swanson on June 21, 1958 in Maple Rapids at the Congregational Church.  Warren passed away on September 23, 1993.

Doris had worked at Sealed Power and also worked on the family farm. Later in life she worked at White's Bakery in St. Johns. Doris and Warren enjoyed playing euchre with the neighborhood card club. She also enjoyed swimming at the HS pool with her friends. Her family was very important to her, especially her grandchildren and great-grandchildren.

The Swanson Family would like to say a heartfelt thank you to Sparrow Hospice and the staff of Vista Springs Timber Ridge Village, and Grace Haven Assisted Living for the care they gave their mother.

To order memorial trees or send flowers to the family in memory of Doris Swanson, please visit our flower store.